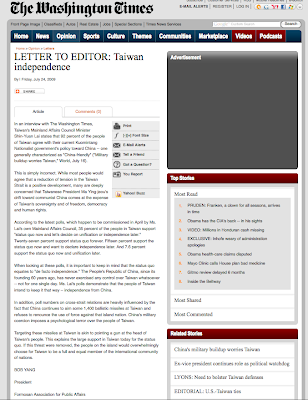 In an interview with The Washington Times, Taiwan's Mainland Affairs Council Minister Shin-Yuan Lai states that 92 percent of the people of Taiwan agree with their current Kuomintang Nationalist government's policy toward China -- one generally characterized as "China-friendly" ("Military buildup worries Taiwan," World, July 16).

This is simply incorrect. While most people would agree that a reduction of tension in the Taiwan Strait is a positive development, many are deeply concerned that Taiwanese President Ma Ying-jeou's drift toward communist China comes at the expense of Taiwan's sovereignty and of freedom, democracy and human rights.

When looking at these polls, it is important to keep in mind that the status quo equates to "de facto independence." The People's Republic of China, since its founding 60 years ago, has never exercised any control over Taiwan whatsoever -- not for one single day. Ms. Lai's polls demonstrate that the people of Taiwan intend to keep it that way -- independence from China.

In addition, poll numbers on cross-strait relations are heavily influenced by the fact that China continues to aim some 1,400 ballistic missiles at Taiwan and refuses to renounce the use of force against that island nation. China's military coercion imposes a psychological terror over the people of Taiwan.

Targeting these missiles at Taiwan is akin to pointing a gun at the head of Taiwan's people. This explains the large support in Taiwan today for the status quo. If this threat were removed, the people on the island would overwhelmingly choose for Taiwan to be a full and equal member of the international community of nations.